“Your summer sand camp was by far the best volleyball training my daughter’s ever had. She was introduced to a whole new way to view the court!”– Michelle

Our summer camps are a great way to get the benefits of cross training while having fun.

Outdoor volleyball is a great opportunity to improve your physical strength and your vertical. We work on teaching you the volleyball strategy and take advantage of the smaller court size which makes you a better indoor player and better prepared for high school tryouts.

“This was the perfect opportunity to get my daughter to keep playing but with a different focus. The camp helped get her ready for HS tryouts and definitely improved her sense of the court. Thank you.” —Mark 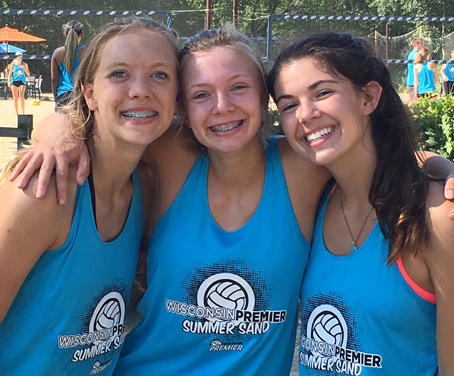 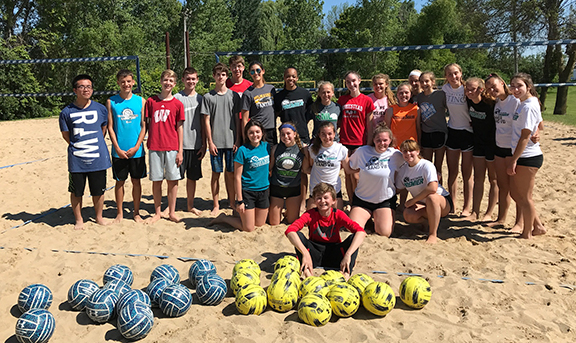 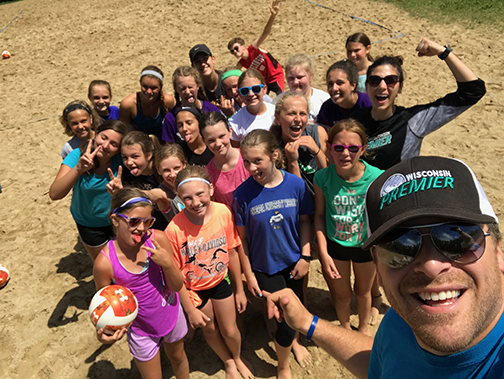 “It was awesome! The music was rockin’, the coaches made it so much fun, being outside, playing in the sand…everything was so cool.” — Sam 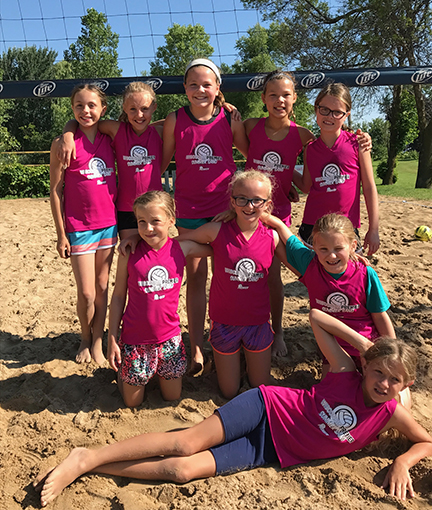 Awards and prizes rewarded to players throughout the session 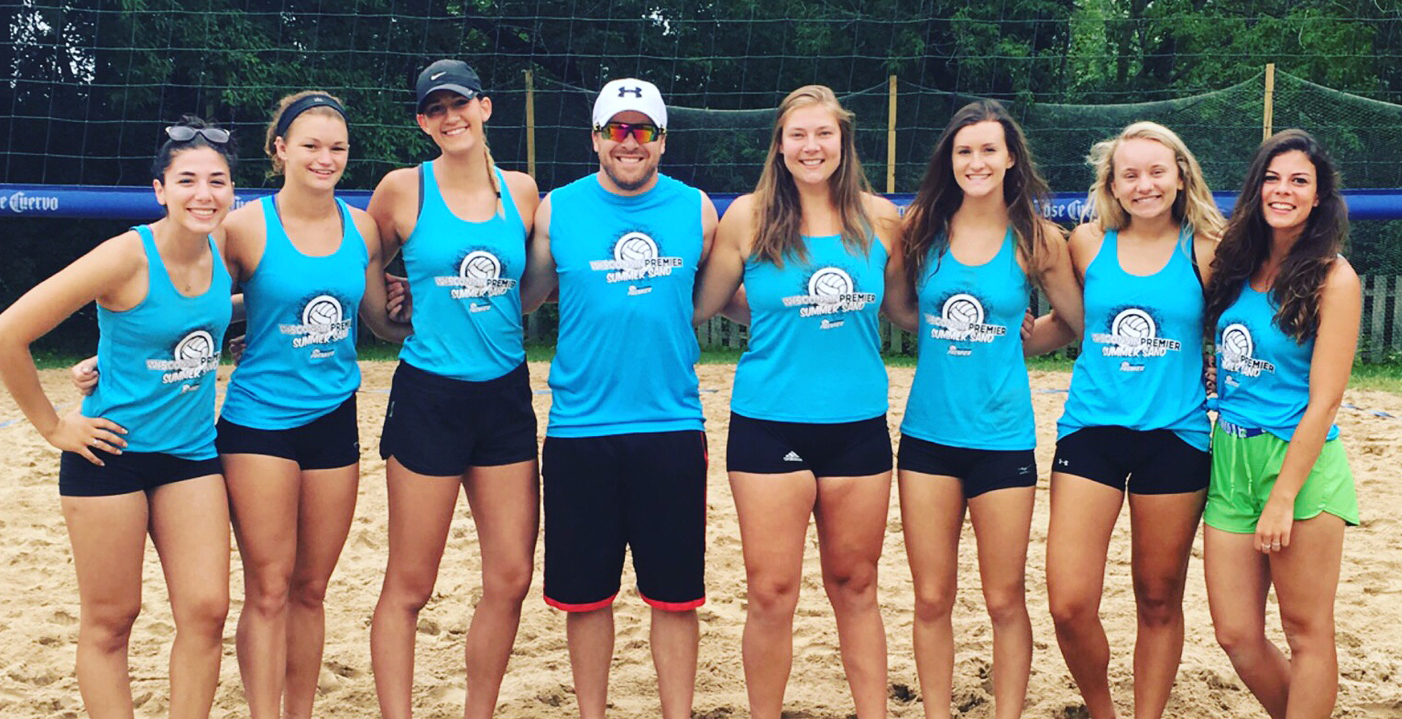 Alex has collegiate, high school, club, and elite camp volleyball coaching experience spanning the past 10 years. He brings an immense passion in developing players’ volleyball skills to the next level and he delivers with winning records. He has over 50+ tournament victories in his club coaching years. And has coached over 475+ athletes over the past 9 years from high school, club, college and in elite camps.  Many of his players have gone on to play at the NAIA,NCAA D-3, D-2, and D-1 levels.

He currently serves as one of the Wisconsin Premier VB Club Directors and is coaching the 18 Teal Club team. He has led this team to 45 victories including qualifying them for the USAV Nationals. 7 of his current players are advancing to play college volleyball next fall with 5 of them on full scholarships!

He also coached with Concordia University the past three years where he helped lead the Falcons to a 24-7 record in 2014 which broke the school record for most wins in any regular season!

In 2014, he coached his 6 Select Team to the USAV National Championship match. This accomplishment was the first Wisconsin Club team to reach the USAV national championship since 2004 at USAV Nationals!

In 2013, he coached his team to win the Minneapolis Northern Lights Qualifier beating out 78 teams.

In 2012, he coached his club team to win the Badger Region Championships Open.

In 2007 he served as the varsity assistant coach at Homestead High School . In 2010  he was quickly promoted to Head Varsity Volleyball coach at West Bend West where he racked up over 70+ win in just three years along with two Regional titles. He led the 2010 team to the school’s first Conference Championship in a decade, and to final ranking of 4th in the D-1 state rankings.

He founded the “Uhan’s Skills and Competition camp” which ran for 4 years.

He played and coached beach volleyball for past 8 years with playing in events down at Bradford Beach.

He played at Homestead High School where he was All-Conference and All-academic player.

Henning had a decorated career as a defensive specialist/libero at North Dakota State where she finished second all-time in program history with 1,574 digs. She also owns two of the top four seasons for total digs. Henning’s career digs average per set was 3.92. During her career she helped the Bison amass an 82-42 record and three Summit League titles.

She also won a state championship in High School Volleyball at Kettle Moraine Lutheran High School where she was an All-State player.

The Jackson, Wis., native is working towards her Master’s Degree in occupational therapy at CUW and also was the graduate assistant coach for the Falcons this past season.

Jessie played 6 years of Club volleyball and her team took 2nd and 3rd at JVA Nationals in Florida. She went to Greenfield High School. She was All Conference Middle, all 4 years in high school.  She also was “Player of the year” in the Woodland Conference.

Jessie plays Division 1 volleyball currently in college at UW-Milwaukee for the Panthers.  She has coached many UW-Milwaukee and Greenfield camps.  She also coaches positional training for Wisconsin Premier Volleyball Club.

As a coach, Jessie is very versatile to teach any skill. She excels at pin pointing the little things that need correcting which leads to huge skill advancement.

Jada plays at Cornell University as a Hitter

Jada brings experience, passion and loads of energy. We’re excited to have her in the sand with us. Check out her list of accomplishments.

• Was named First-Team All-Conference 3 years in a row

• Won the Academic Athlete Award in 2014

• As a senior, led the team in kills and blocks and was named the team’s Player of the Year and MVP

Jada says, “Sand Volleyball is important in teaching game strategy, shot making, communication, and court awareness. Also develops your all around skill as a player not just your one position. Girls need to get out of their comfort zone and try different positions because they never know what they are great at until they try it.”

Terese Zymanek ( Jr. at Concordia U.)

Terese played High School  at Pius XI in Milwaukee. She graduated on the High Honor Roll for three years, won the Presidential Education Award her senior year, helped the volleyball team win a sectional title and a Woodland Conference championship, was Named All-WC Second Team her senior year, led the state with a .514 hitting percentage her senior year and earned varsity letters in volleyball and track & field.